Did you see the ‘super moon’ last night? Weather at Balsam was a bit iffy with scattered showers Friday and Saturday morning. Fortunately the clouds and rain gave way to blue skies and cool breezes both days. The moon was noticeably brighter Friday night as we were leaving the Boarding House. Saturday night (after the annual Derby Party) was mostly clear with the moon’s glow just visible in the trees to the east. We opened the observatory roof around 9:30 and were greeted with a brilliant orb shining through the limbs and passing clouds. It reminded me of a scene from a horror movie with an eerie moon and howling wolves. (ok there were no actual wolves but you get the picture). It was a beautiful sight through binoculars – no telescope needed. So you ask what makes a ‘super moon’? Actually its nothing that extraordinary. About once every 412 days the moon’s orbit around the earth (its an elipse not a circle) brings it closest to the earth when it is coincidentally full. This results in a larger apparent diamater and brightens the normally bright full moon by about 20%. The point of an objects orbit closest to the earth is known as perigee and technically the super moon is a perigee-syzygy since a sygyzy is an astronomical alignment of three objects (the sun, earth and moon). Although hyped to the max by the media its a pretty ho-hum event to astronomers who normally stay indoors when the light of the full moon washes out more interesting celestial objects.

Venus remains the brightest object in the sky this month and remains high in the sky after sunset until it sets around midnight early in the month. Through even small binoculars or with the naked eye if your vision is very good you can see the crescent shape of Venus at about 30% illumination early in the moon until it wanes to about 1% by the end of the month when it disappears into the Sun’s glare. Look for a thin crescent moon joining Venus just after sunset on the 22nd.

Mars and Saturn are still visible high in the southern sky after dusk.

Its not too early to prepare for the celestial event of the year! On June the 5th Venus completes the second act of its 105 year cycle by passing across the face of the Sun. In 2004 the transit was only visible from Europe and Asia. The next transit will not be until 2117 so this will be your last chance unless you are planing on outdoing Methuszla!

This time the first two hours of the 6 hour transit will be visible from Balsam weather permitting. Since the transit will occur as the Sun is setting you will need a good view of the western sky to see it. Unfortuately the trees at Dogstar Observatory will get in the way so I hope to set up a portable telescope and other viewing aids on the golf course or other nearby high location (Never look at the sun without proper filters or eclipse glasses!). Stay tuned for more information. The picture below was taken with a Canon DSLR and a portable telescope from our balcony on the coast of Spain in 2004. 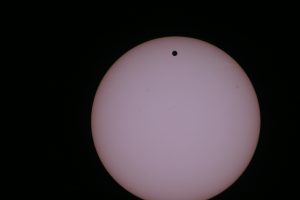