Tonight will be a great night for observing the International Space Station. No equipment needed – just walk outside and look up! Due to its high inclination orbit, the ISS is visible in groups of passes at any particular spot on Earth either clustered in the early evening or just before dawn. Since it shines by reflecting light from the Sun, it must be just at the right point in its orbit to pass overhead while the Sun is below the horizon to make it dark enough to see. The pass tonight at 9:11 EDT should be particularly nice since it will be almost directly overhead and very bright (magnitude of -2.7 which is almost as bright as Venus).

For times at other locations go to heavens-above.com and enter in your nearest city. 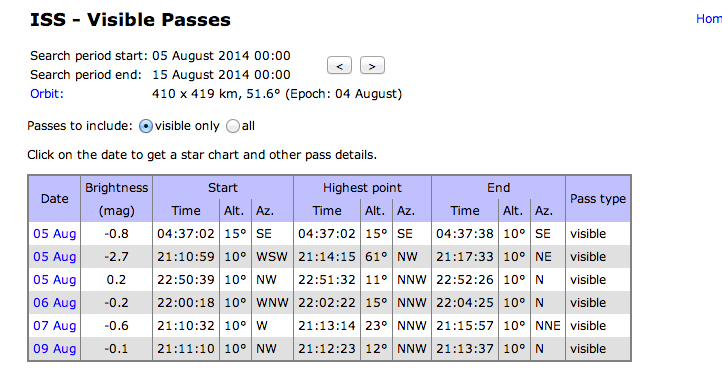 As the nights are getting longer and drier (hopefully!) there should be more opportunities to see the wonders of the night sky. The largest full moon of the year will occur the night of August 10th. Its one of the so-called ‘super moons’ which occur every year when a full moon coincides with the closest point of its orbit around the Earth.

The annual Perseid Meteor shower peaks in the hours before dawn on the mornings of the 12th and 13th but the waning Moon will wash out all but the brightest ones. Still worth going out and taking a look if you are away from city lights.

On the night of August 31st the crescent Moon, Mars and Saturn will be close together in southwest.

Mars and Saturn are still very viewable all month with binoculars or a small telescope. Look for Saturn low in the southern sky and Mars to the west of Saturn and a bit higher. On a clear night Saturn will appear somewhat oblong to the naked eye and Mars will be a pale salmon color.

Venus and Jupiter are visible in the pre-dawn skies from the 14th to the 21st. They come within less than one degree apart on the 18th about an hour before sunrise (around 5:30 AM). This should be a spectacular site in binoculars and well worth getting up early to see.

Thats the highlights for this month. Remember to turn off unnecessary outside lights at night and on any clear night go outside and see whats up in the skies of Balsam Mountain Preserve.